Few things get me repeatedly to the point where I wonder “why did I do this again?”. Finishing a chocolate bar in one go is one, making films is another. I tie myself in such knots when trying to tell a story that I can’t imagine doing it again once finished. Until I find myself right up there again. Up, because it’s a beautiful high. Like a bad habit that lures me back every time.

Perhaps it’s this reflection that led me to making my last film just recently. Last, as in ’last’. My motivation for making films has always been social; it’s my contribution to understanding and empathy. I felt that documentary film had a huge potential to change viewers’ points of view, to instill new ideas and change actions. I still believe that.

But something changed when I started a farm with my girlfriend a few years back. We did so out of environmental concerns and follow regenerative agriculture methods to produce the best food in the best way for our surroundings. We live in an area where soil erosion and overgrazing are the norm. By farming differently I hope to change this (agri)cultural reflex, showing successful ways around plowing and spraying might have an impact on the way we grow our food and our soils.

I notice the same ambition in my farming as in my filmmaking, hooves or frames with a goal. Given the limitations of time (and space), I realised though that it would be difficult to both farm and continue to make films on a professional level.

A sense of urgency

And so, the question arose once again, why make films? I believe that films change ideas that change actions. Considering our environmental predicament, these kinds of efforts are probably more important than ever. At the same time I have doubts: I question if film is a quick enough medium, if it reaches enough people, if documentary films even preach beyond the choir, if it’s really the best use of my time.

Read the text in Finnish.

The writer teaches Documentary workshops at Kansalaisfoorumi. Read more about him and his work on his website. 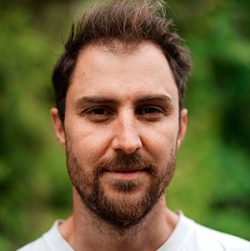 Pieter-Jan is a documentary film director and regenerative farmer. He works as a programmer for DocPoint Helsinki Documentary Film Festival and studies for a MA in Documentary Film at Aalto University. Photo: Essi Ruuskanen Kaikki tämän kirjoittajan jutut >